Since version 08/2016 the MESYS shaft system calculation software allows the combination of elastic shafts calculated a 1D-beam-elements with 3D-elastic parts modeled as 3D solid elements. The 3D-elastic parts can be imported CAD geometry or defined parametrically.

The 3D-elastic parts were condensed to single nodes at the interfaces to the shaft model. The next version of the software will additionally allow then coupling of surface deformations for gears and bearings. The deformation of a housing will lead to deformed bearing rings and gear forces will lead to deformations of the gear body. A first example with elastic gears and bearing rings is a planetary stage shown in figure 1.

The example is a shaft with two rigid supports with a centered gear and with a gear with a small offset from the center. 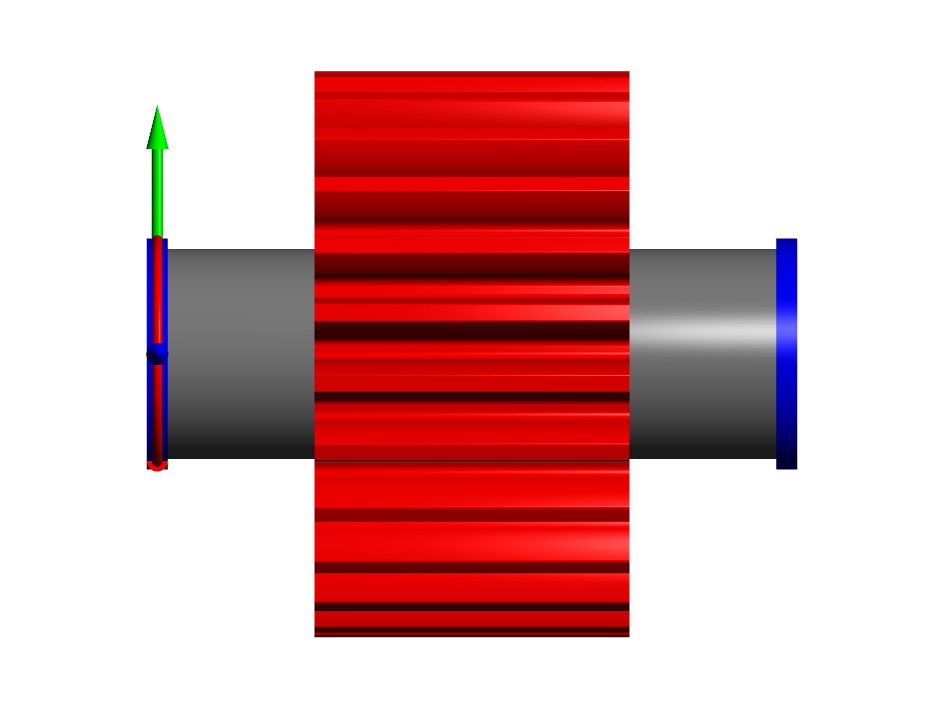 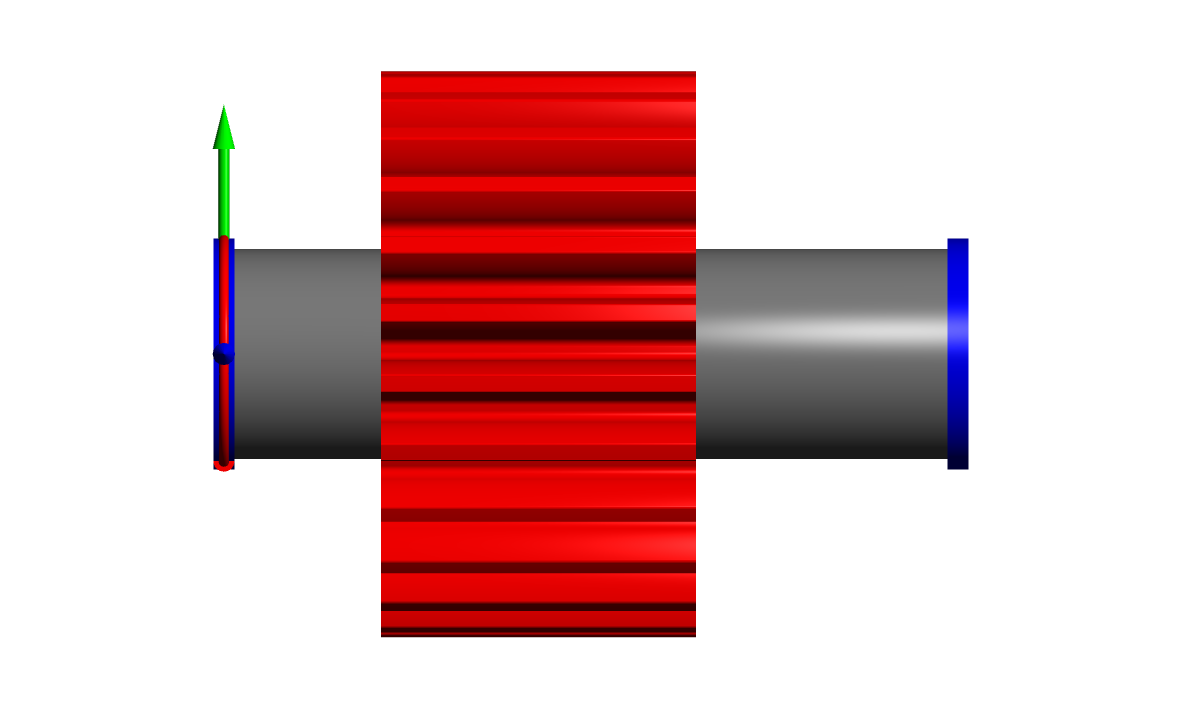 For the calculation of the gear deformations the gear is in mesh with a second stiff gear which is rigidly supported over the whole width. All six example gears are in contact with this center gear and are loaded with the same torque introduced on the left side of the shaft. 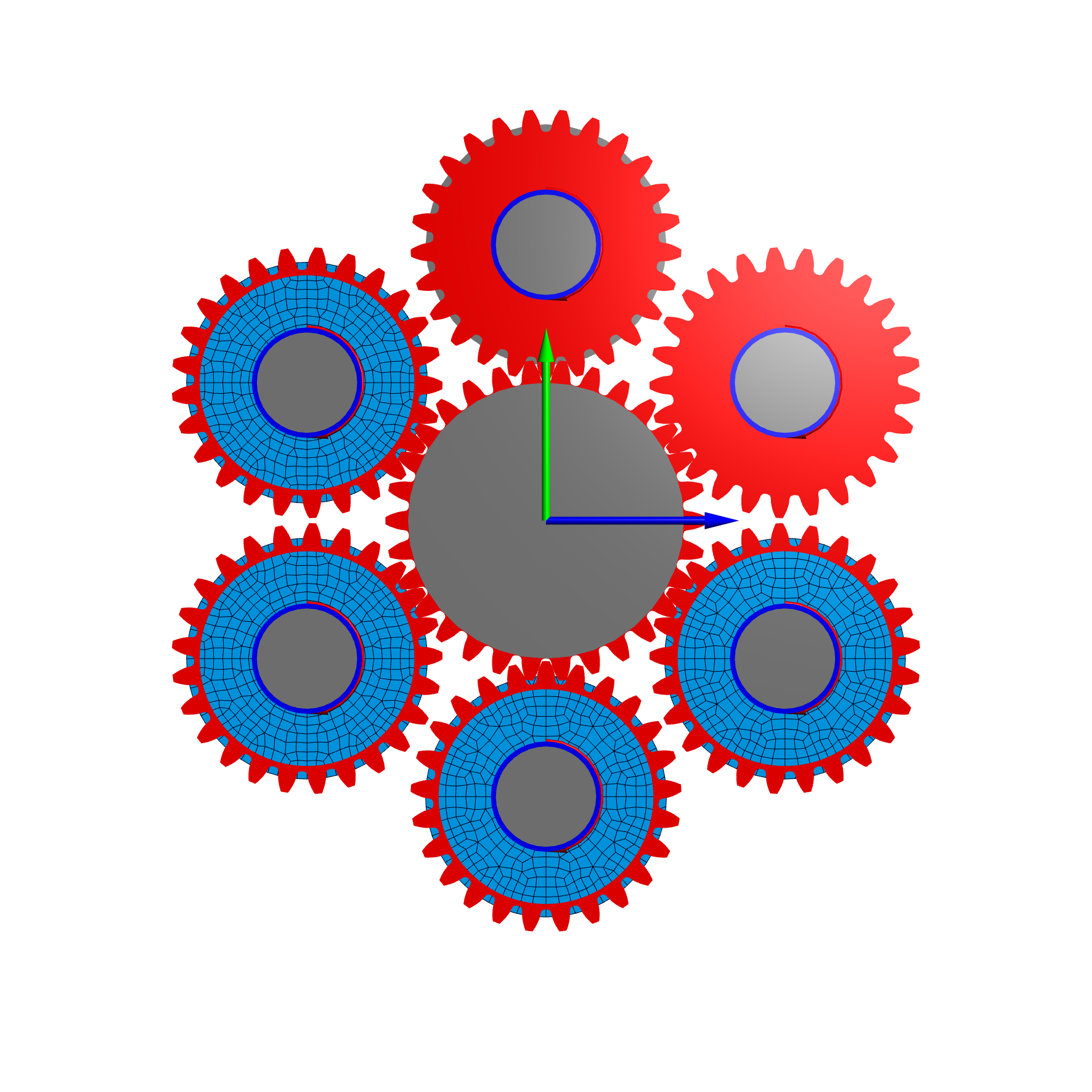 Figure 3: Shaft system for the example

The results are shown for the centric gear and for the eccentric gear:

The maximum shaft bending is for the inner shaft not considering the gear body. The load ratio wmax/wavg is similar to the face load coefficient, but only load dependent effects are considered and no manufacturing errors. Additional manufacturing tolerances of deflections of the supports would lead to larger face load coefficients. The gap widths is derived from the deformations of the flank line, by virtually rotating the gears back until they have only contact at one point. It should the amount of deformation on the flank line.

Case 1 and 4 both use a fully cylinder as a gear body. The shaft bending of case 4 is larger than of case 1, still the deformations of the flank line are smaller as the gap widths or line load shows. This is because the shaft can deform inside of the gear body. Generally a beam model is too stiff on diameter changes. Many programs for rotor dynamics therefore use a cone for the stiffness diameter on diameter changes. The 3D solid model does consider the stress distribution at these diameter changes automatically without the need to guess average diameters or cone angles.

Case 2 using a mean diameter for the gear body is not useful for the gear deformation like the comparison with case 5 can show. In case of an interference fit the shaft is not stiffened by the gear like in case 5. Still case 5 only shows very little deformation on the flank line. This model with a reduced diameter is only useful for the calculation of the shaft bending line as the shaft bending in case 2 gets larger than in case 1 and closer to case 4.

FThe following table shows the shaft deflection for the six cases with centric and eccentric gear. Note that the scale of the diagrams is different.

The following table shows the line load distribution for the six cases with centric and eccentric gear:

In comparison of case 4 and 5 the small influence of the torsion can be seen. While in case 4 with the solid cylinder a small effect of the torque from the left can be seen, case 5 with the rim shows an effect like a small crowning as the outside will be deformed due to torsion and bending.

Using a more detailed model of a gear body improves the results for the shaft deflection and to the flank line deformations of the gears. In case the simple beam model should be used, the outer diameter of the gear body should be used for calculations for flank line deformations. For a calculation of the shaft deflection a smaller diameter for the gear body can be used and would be a better model for the shaft stiffness.

After a one time static reduction of the gear body which takes about a minute in these cases, the calculation time for the reduced calculation model is still seconds. The only disadvantages is an increased file size for the calculation files.